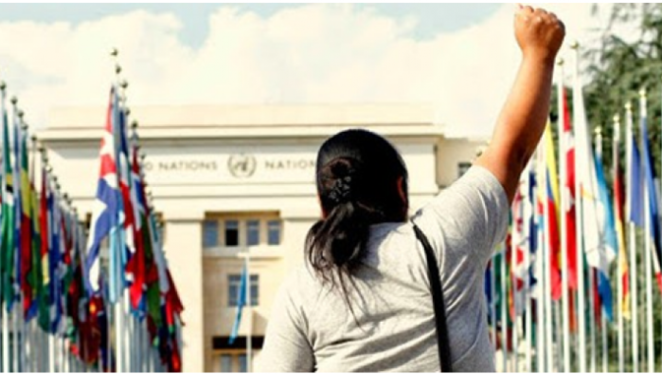 When a State enables the creation of companies under its legal system but refrains from imposing safeguards on their activities abroad, it can benefit from corporate activities that might result in human rights violations in other territories. This situation is exacerbated when the host State where subsidiaries operate is either unwilling or unable to ensure the rights of its own citizens, when they face corporate abuses. In the absence of a treaty regulating extraterritorial obligations (ETOs) in the context of the overseas operations of companies, the content of said obligations has been developed primarily through the statements of international human rights bodies.

This essay addresses the main gaps of the UN Guiding Principles framework regarding the international human rights standards on ETOs. It describes the most relevant ETO standards developed by the UN and the Inter-American systems and suggests that the adoption of a binding treaty on business and human rights has the potential to fill in regulatory loopholes that have favored impunity over corporate abuses in the context of overseas operations. Finally, the essay concludes that despite the north-south divergences over the content of said treaty, the existence of a diplomatic forum within the UN Human Rights Council for the negotiation of a binding treaty provides an important venue to improve the human rights standards and to strengthen the international commitment towards ETOs.

1.1 General standards of the UN and Inter-American human rights bodies

At the Inter-American level, the most relevant pronouncement took place in April 2016, when the Inter-American Commission on Human Rights (IACHR) published the report Indigenous Peoples, Afro-Descendent Communities, and Natural Resources: Human Rights Protection in the Context of Extraction, Exploitation, and Development Activities. The report addresses the obligation of corporations’ home States (where companies are headquartered or registered) and host States (where extractive projects are located) to bring their laws and policies into line with the obligation to prevent, mitigate, and redress human rights violations.

The American Convention on Human Rights, the International Covenant on Civil and Political Rights, as well as other international treaties, contain general clauses on how states should implement the obligations to respect, protect, and guarantee rights. The scope of these obligations can vary according to the way that responsibility is attributed to a given state. When international responsibility stems from extraterritorial effects of a given violation, there are a limited number of crimes that give rise to the exercise of the so-called “universal or quasi-universal jurisdiction”.  In fact, there are several treaties that suggest, and in some cases require, the exercise of extraterritorial jurisdiction to prosecute certain categories of transnational crimes, such as the Inter-American and United Nations Conventions against Terrorism (Arts. 5.2 and 6.1) and the Inter-American Convention against Corruption (Article V, clauses 3 and 4). In addition, the General Assembly of the United Nations has adopted two main international conventions related to terrorism that are worth noting, since they impose extraterritorial jurisdiction. They are the International Convention for the Suppression of Terrorist Bombings (art 7) and International Convention for the Suppression of the Financing of Terrorism (Art. 7). These two conventions only apply in cases of crimes of a transnational character (art. 3). The OECD 2011 Convention on Combating Bribery of Foreign Public Officials in International Business Transactions (Art. 4) establishes legally binding standards to criminalize bribery of foreign public officials in international business transactions. The Council of Europe Criminal Law Convention on Corruption ETS No 173 (Arts. 2 onwards) also deal with criminal offenses committed abroad. Still in relation to transnational crimes, there are the Optional Protocol to the Convention on the Rights of the Child  on the Sale of Children, Child Prostitution and Child Pornography (Arts 1 and 3) and the Convention Against Torture (Art. 5).

In the context of tort law and civil claims, there is no uniform practice or multilateral treaty requiring the exercise of extraterritorial jurisdiction to redress human rights violations. A small number of treaties call for the establishment of civil remedies, while regulating the prosecution of certain international crimes. The UN Convention against Torture is one of the few multilateral instruments that do so. Article 14 of this Convention requires states parties to provide an enforceable right to compensation, including for acts of torture that take place in a foreign country.

Although international human rights standards are not prescriptive as to the obligation to pursue criminal liability in the home states of companies involved in human rights violations, they clearly demand effective remedies to be pursued. Therefore, it can be said that the current international standards set out, at a minimum, the home state’s obligation to enable civil remedies for those persons whose rights have been violated by overseas operations of companies headquartered, registered or domiciled under its jurisdiction.

Finally, when an enterprise’s behavior entails certain international crimes, states should also pursue criminal proceedings. These proceedings should also be instigated for crimes that take place abroad when domestic law does not prevent the exercise of criminal extraterritorial jurisdiction and when International Law so requires.

As the UNWG mandate is linked to the UN Guiding Principles, the first hindrance to promoting ETOs stems from the narrow approach of this document regarding extraterritorial obligations.  The only excerpt related to ETOs reads as follows:

Principle 2.  States should set out clearly the expectation that all business enterprises domiciled in their territory and/or jurisdiction respect human rights throughout their operations.

At present States are not generally required under international human rights law to regulate the extraterritorial activities of businesses domiciled in their territory and/or jurisdiction. Nor are they generally prohibited from doing so, provided there is a recognized jurisdictional basis. Within these parameters some human rights treaty bodies recommend that home States take steps to prevent abuse abroad by business enterprises within their jurisdiction […].

Three months after the adoption of the UN Guiding Principles, a group of international experts systematized the customary and treaty-based standards regarding ETOs under International Law. The resulting Maastricht Principles on Extraterritorial Obligations of States in the area of Economic, Social, and Cultural Rights asserts that “[a]ll States have obligations to respect, protect, and fulfill human rights, including civil, cultural, economic, political, and social rights, both within their territories and extraterritorially.”  Unlike the UN Guiding Principles, the Maastricht Principles affirm States’ obligation to monitor multinational companies domiciled in their jurisdiction and refrain from supporting them whenever they are involved in human rights violations in the territory of third countries.

In addition to the ETO standards developed before 2011, when the UN Guiding Principles and the Maastricht Principles were adopted, international human rights organs have amplified the content of treaty rules and principles regarding ETOs. However, the process of implementing the UN Guiding Principles by states has not accommodated these developments properly. This can be easily demonstrated by analyzing the content of the National Action Plans on Business and Human Rights adopted to date.

The UNWG has addressed ETOs when providing assistance to governments that are developing their NAPs. In December 2014, it published the Guidance on National Action Plans on Business and Human Rights, which points out that:  “[w]hile the Government’s legal duty is generally restricted to adverse impacts in the country’s territory and/or jurisdiction, States should also take into account extraterritorial implications of business enterprises domiciled in their territory in accordance with the UNGPs” (pg. 12).

As to the remedial mechanisms for violations committed by transnational companies, the document asserts that

Access to remedy can be provided by state-based and non-state-based, as well as judicial and non-judicial mechanisms (see Guiding Principles 26-31).  States should ensure that the combination of the measures available allows for effective remedy.  In this regard, Governments should consider: – Assessing (in case[s where] this has not yet been done) to what extent victims of domestic and extraterritorial adverse corporate human rights impacts have access to remediation mechanisms and address the identified gaps (pg. 28).

Since the publication of the UNWG Guidance on National Action Plans on Business and Human Rights in 2014, 19 States have adopted or updated NAPs and 21 are in the process of drafting such an instrument. However, all the NAPs adopted so far are either silent or vague with respect to ETOs. Very few provide a comprehensive explanation of grievance mechanisms for corporate abuses and none of them give specific examples on how this mechanism should operate to deal with extraterritorial violations claims. This pattern indicates that the efforts of the UNWG to promote the inclusion of ETO provisions in NAPs processes have had little or no effect on state practice.

In June 2016 the UN HRC passed resolution 26/9, to “establish an open-ended intergovernmental working group (IGWG) on transnational corporations and other business enterprises with respect to human rights, whose mandate shall be to elaborate an international legally binding instrument to regulate, in international human rights law, the activities of transnational corporations and other business enterprises”. This resolution determined that the IGWG should prepare elements for the draft of a legally binding instrument for substantive negotiations. In September, 2017, the IGWG published the draft elements of the binding instrument, which includes a section on jurisdiction that, among other considerations on ETOs, points out that:

it has been considered that the legally binding instrument has an enormous potential to avoid TNCs [Transnational Corporations] and other OBEs [other business enterprises] from making use of limitations established by territorial jurisdiction in order to escape from potential prosecution in the host States where they operate. The inclusion of a broad concept of jurisdiction will also allow victims of such abuse by transnational corporations to have access to justice and obtain remediation through either the forum where the harm was caused, or the forum where the parent company is incorporated or where it has a substantial presence. Similarly, an instrument of this nature could allow the standardization of jurisdictional rules and human rights obligations, allowing victims to access prompt and effective access to justice.

Finally, the draft elements stress the importance of setting clearer rules on access to justice for victims of violations committed by companies and their subsidiaries operating abroad, and reaffirm that “State Parties’ obligations regarding the protection of human rights do not stop at their territorial borders”.

Given the narrow approach on ETOs that has prevailed under the UN Guiding Principles framework and under the NAPs processes, the inclusion of such debate under the business and human rights binding treaty deliberations is welcome and necessary. The treaty provides an opportunity for the international community to establish clearer rules on this field, in line with the standards already developed by international human rights bodies. These rules should address, at a minimum, the parameters for states’ obligations to regulate the activities of companies domiciled in their jurisdiction, registered under their laws, with administration and significant business operations in their territory. In developing the treaty, the drafters should clarify these elements and ensure that they are consistent with the standards already in place, including those that stem from the pronouncements of international human rights bodies.